The Suzuki Alto is a very small car (kei car) designed by Suzuki. Its selling points include low price and good fuel economy. The model was introduced in 1979 and has been built in many countries worldwide. 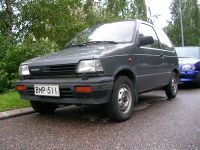 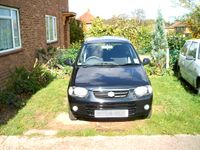 The 2nd-generation (CA71/72) (see 1st photograph in this page) was introduced in 1984. It continued with the SS40's engine, but was also available with turbocharged and multi-valve engines. A 5-door body (identical to the Fronte's) became available in 1985. A Cervo on the SS71 base was introduced in 1988, with a new 547-cc engine.

The 3rd-generation (CL11/21/22) replaced the CA71 in 1988. It had strikingly angular styling, with an unusual glazed C-pillar on the 5-door. Initially it used the SS71 Cervo's engine, but when the kei-car standards were changed in 1990 the capacity was increased to 657 cc. This was the last generation of Alto to have an associated Fronte model. An unusual feature of this generation was the availability of a version with sliding doors, the Slide Slim, intended to make it easier to enter and exit in tight spaces. Suzuki also produced a version (the Hustle) with a high roof behind the front seats, which was unusual in that it used a modification of the Alto's body rather than a completely new body; this made it possible to link the Hustle with the Alto, but made the styling rather unharmonious.

The 4th-generation (HA11) appeared in 1994. The 657-cc engines were joined by a new high-performance 658-cc. The styling displays an interesting blend of features: the tailgate and rear doors are still fairly angular, but the front is beginning to be more rounded - a trend which would be continued in later years.

The 5th-generation Alto (HA12/22) was introduced in 1998. The styling was generally more rounded, the shape of the cabin showing the Alto's relationship with the new Kei. The 658-cc engine was produced in a version without a turbocharger, joining the turbocharged version and the 657-cc engines. Several derivatives were produced from this generation. Suzuki produced two "classic-style" versions: the Alto C [1] with a deep chrome grille and a curious headlamp arrangement by which circular main lamps were joined with ovoid sidelights and indicators, which was shared with the Alto Works[2]; and the Alto C2 [3] which had separate headlamps and sidelights and a wider grille. Mazda also sold the standard Alto as the Carol, and Mitsuoka used the Carol as a basis for their Ray.

The 6th generation (HA24) was introduced in 2004. The bonnet and headlamps curved down at the front, giving a similar effect to the Toyota WiLL Vi or the Citroen C2. The Alto was re-aligned within the range to accommodate new models such as the Cervo and Alto Lapin. In Japan, this version was rebadge as Nissan Pino. 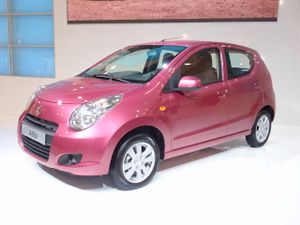 The 7th generation was unveiled at the 2008 Paris Motor Show. It was developed jointly with Nissan (which called their version Nissan Pixo) to be a global car and its production center will be situated at Maruti Suzuki's plant in India. It is stylistically based on the Suzuki A-Star Concept.[1] The Alto was conceived as a response to global warming. The vehicle’s emissions will be only 109g of CO2/km. It will be an eco-friendly car.[2]

Performance versions of the Alto started to appear in 1985 when a turbocharged engine was made available. The CA71 gradually acquired more performance-related modifications until the Works version was introduced in 1987. The Alto Works was the first kei-car to reach the legal limit of 64 hp (48 kW). It acquired considerable popularity, and models of it are still made by Fujimi.

The performance models continued in the Alto's later versions; as technology and the kei car regulations changed more performance became available. By 1999 the top engine was a light-alloy 658-cc with turbocharger, DOHC and 4 valves per cylinder, which produced 64 hp (48 kW) and 80 ft·lbf (110 N·m).

As Suzuki introduced new models into the kei car class, it began to spread the performance engines to other models and designate the Alto as a less costly model. The current Alto is only available with 54hp in Japan; the 64hp engine is now provided in models such as the Kei Works and the Alto Lapin SS.

Early Altos were exported with few changes apart from enlarged engines and bodywork and different nomenclature. So the SS40 became the SS80 with a 796-cc engine. (Some Fronte models were also called Alto in Europe.) However, as Suzuki made agreements with companies such as Maruti to build their models, it began to be possible to sell different models to different areas:

The locally-made versions of the various Altos have had long production lives, and have sometimes won great popularity, as with the Maruti 800. In particular the CA71 generation has been produced in many countries, and can frequently be seen being offered as a cheap city car among several more newly-designed products.