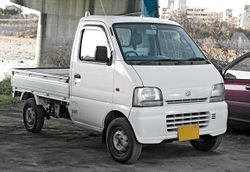 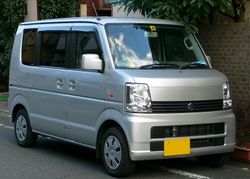 Suzuki Every Plus (early name of Every Landy)

The Suzuki Carry is a kei truck produced by the Japanese automaker Suzuki. The microvan version is sold as Suzuki Every. In Japan, the Carry and Every are Kei cars but Suzuki Every Landy, the bigger version of Every had a longer hood for safety purposes and a larger 1.3-liter 82 hp (61 kW) 4-cylinder engine. They are given different names and sold in several countries.

The Carry was constructed with a ladder frame architecture. The van version was a five-door, with dual sliding rear side doors; available as rear-wheel drive or four-wheel drive.

In 1976 the ST20K was released.The "K" referred to the "trucklike" nature of the vehicle in that it had 3 drop sides as opposed to the utility version which had only a tailgate and formed sides.It had a 3 cylinder 539 cc water cooled 2 stroke engine and a carrying capacity of 350 kg (772 lb).