The Suzuki SJ-Series began production in 1982 in Hamamatsu, Japan. In Japan, the SJ-Series was sold as the Suzuki Jimny and was a kei car. It was produced with both 550 cc and 660 cc 3-cylinder engines for domestic use. The SJ-Series was lengthened and widened for export purposes and had many names worldwide: Suzuki Samurai, Suzuki Sierra, Suzuki Potohar, Suzuki Caribbean, Suzuki Santana, Holden Drover (Australia) and Maruti Gypsy (India). 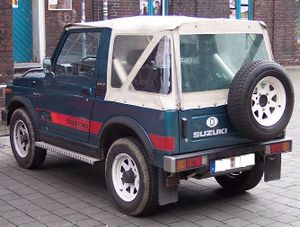 Suzuki SJ410 - Note the Jeep badge added by the owner

A 4-speed manual transmission was standard, as were non-power assisted drum brakes front and rear. The SJ-410 came as a half-door convertible, pickup truck, 2-door hardtop, raised-roof hardtop, and no-glass hardtop. The SJ was produced in Spain by Santana Motors in their Linares, Jaén factory and sold as a domestic vehicle in Europe due to its over 60% native parts.

In 1984, the SJ was revamped with the launch of the SJ413. The SJ413 included a larger 1.3 liter 4-cylinder engine, 5-speed manual transmission and power brakes all around. The body and interior were also redesigned, with a new dashboard, seats, and grille. The SJ410 remained in production through 1985 with the old specifications. 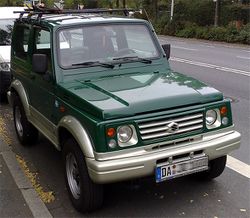 The SJ-Series was introduced to the United States (Puerto Rico (SJ-410) and Canada earlier) in 1985 for the 1986 model year. It was priced at just $6200 and 47,000 were sold in its first year. The Samurai had a 8V 1.3 liter, 63 hp (47 kW), 4-cylinder engine and was available as a convertible or a hardtop. The Suzuki Samurai became intensely popular within the serious 4wd community for its extreme off road performance and reliability compared to other 4wds of the time.

The Samurai is also considered a great beginner 4wd due to its simple design and ease of modifications with engine swaps and suspension upgrades. 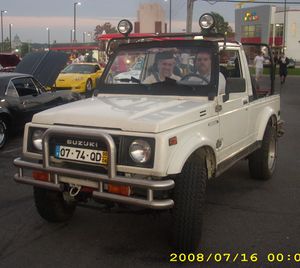 The 1988.5 model Samurai was re-tuned for better on-road use in the United States. This revision included softer suspension settings and a larger anti-sway bar to reduce body roll. A lower 5th gear (.865:1 vs the earlier .795:1) increased engine rpm and power on the highway, and improved dashboard and seats made the Samurai more comfortable.

A new 1.3 4-cylinder engine with throttle-body fuel injection was introduced with 66 hp (49 kW). The Samurai was withdrawn in Canada in 1989 as the Suzuki Sidekick replaced it; however, sales in the United States market continued until 1995. Low sales prompted the withdrawal of the Samurai from the United States and it was replaced by the Suzuki X-90. The disputed 1988 rollover report by Consumer Reports was recognized as the cause of the Samurai's declining sales..

Exactly the same as the Suzuki Samurai but were assembled in Australia.

Similar to the SJ-413/Samurai. It is only available in a LWB version and is still in production. More information can be found at Maruti Gypsy

The Samurai continued for sale outside the United States (referred to as the 'Coily'), with a substantial update in 1996. This included a coil spring suspension, though the live axles were retained. The rest of the truck was redesigned as well, with new seats, dashboard, steering wheel, and doors joining a "macho" exterior.

Not all SJ models were updated however, with the original narrow SJ410 still in production in some countries. Even though the Jimny replaced the SJ in most markets after 1998, the SJ remains in production today.

The Suzuki Samurai gained an infamous reputation of being an unsafe car and prone to a rollover after Consumer Reports, the magazine arm of Consumers Union, reported that during a 1988 test on the short course avoidance maneuver (Consumer Union Short Course Double Lane Change, or CUSC for short), the Samurai experienced what they deemed as an unacceptable amount of roll-over while undertaking the severe turn. The roll-over which CU deemed unacceptable stemmed from the sudden swerve simulation part of the test where, for example, a car backs out of a driveway or drives forward from a side street or intersection and into traffic, causing the driver to unexpectedly swerve to avoid hitting the object that is obstructing the drivers path.

The dispute and eventual lawsuit stemmed from the CR statement easily rolls over in turns, which CR attributed to the sudden swerve test, and not meant to generally apply to the Samurai in retrospect to other tests that CR undertakes to simulate normal routine driving such as 0-60 mph acceleration and stopping. However, the use of the adverb easily may have been misconstrued or misunderstood by others to indicate that the Samurai was inherently an unsafe car prone to roll-overs in any sort of driving conditions.

Suzuki sued on the grounds that the statements made by CU damaged their reputation and the reputation of their vehicles in 1996. Suzuki sued for $60 Million in damages and unspecified punitive damages for what Suzuki claimed was willful fraudulent testing[1]. However, after an 8-year legal battle and several dismissals of Suzuki's claims against CR in Federal courts, both sides settled out of court through mutual consent in 2004.[2]

In the settlement, CR agreed to mention the agreement that it "never intended to imply that the Samurai easily rolls over in routine driving conditions." And it notes that it "never questioned the safety of any other Suzuki model" and, in fact, "praised the Suzuki Sidekick and recommended the Suzuki Vitara/XL-7."[3] This agreement is noted whenever mention of the Suzuki Samurai is made in any media CR publishes, such as Used Car guides and even website searches on their website.

The Samurai in question benefitted from wheel, tire, suspension changes, and a supercharged G16A 4-cylinder underhood. It was the third attempt for the two man team, after encountering weather difficulties on the first attempt and an engine fire in the second. The previous record holder's team lead by Matthias Jeschke riding a Jeep Wrangler, left a sign reading "Jeep Parking Only: All others don't make it up here anyway". The Chilean team found the sign, blown down by strong winds, and brought it back to civilization as a souvenir.

The modified vehicle used in the expedition.

This Record was duly Certified by the Guinness World Record in July 2007.