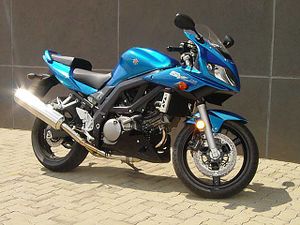 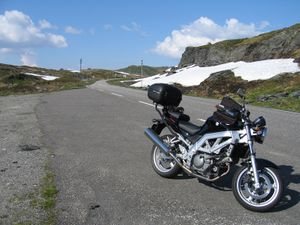 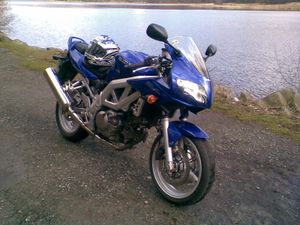 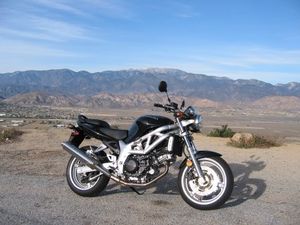 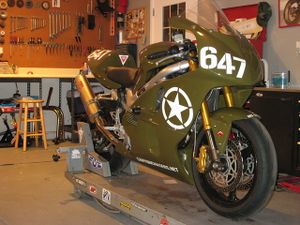 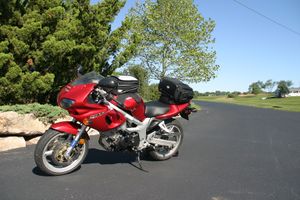 The SV650 and variants are street motorcycles manufactured since 1999 for the international market by the Suzuki Motor Corporation, featuring a mid-sized V-twin engine and medium performance components.

Suzuki introduced the SV650 in 1999 as a budget entry in the emerging naked bike market and, as of 2008, offered both naked and fully faired. With a MSRP of $5699 in the US, the bike provided a sporty though easily manageable ride. The combination of light weight, rigid chassis, strong handling, and the V-twin's strong mid-range torque appealed to beginner and experienced riders alike. Suzuki modelled the first generation of the bikes aesthetics after the Suzuki TL1000S, and, some think, the Ducati 916. The TL is still considered the "big brother" of the better-behaved SV650. The 2003 SV1000 replaced the TL and Suzuki marketed it as a bigger alternative to the second generation SV650. Aficionados sometimes refer to the first generation models as "curvies" and differentiate them from the "pointies", the more angular second generation models.

The SV650 immediately became wildly popular, but American buyers wanted the sportier 'S' version that featured lower handlebars, higher foot pegs and a bikini fairing and windscreen, available only in the European and Canadian markets. American magazines ran articles describing how to import it into the United States. In 2000, Suzuki began importing the SV650S to the U.S.

Because of the relatively low purchase price and excellent handling characteristics, the SV650 became popular with racers which prompted a rebirth of the "lightweight twins" racing classes across North America and the SV650 began winning against the aged Suzuki GS500, Honda NT650 and Kawasaki Ninja 500R, which previously populated the class.

In 2003, Suzuki redesigned the SV650 with a new pressure-cast aluminium truss frame, new bodywork, new swing-arm with revised rear brake calliper mounting, new exhaust, brand new digital speedometer display and a new electronic fuel injection/induction system to replace the carburettor. The new fuel injection/induction system has a certain advantage of the carburettor since it does not need to be cleaned nor does it have trouble from a cold start up. The new model failed to gain initial acceptance by new riders, largely because the new angular aesthetic looked more aggressive and visually larger than the "curvy" first generation SV650. The 2003 SV650s also supported some first generation parts (like the rearsets) thus making 2003 a unique year for finding and repairing certain parts. The tail frame is also angled up higher than 2004+ models. Other than these changes the motor is relatively unchanged and is still the crown jewel of the motorcycle. First model first iterations also had a problem with cranks failing when raced or ridden excessively hard. The 2003 SV650s also came in a special edition Burning Copper colour that is found only in 2003 and also other Suzuki Bikes such as the GSXR-1000 and the GSXR-1300.

For 2004, Suzuki used a new, 40 mm lower subframe and a seat with a narrower design in the front. The trail was raised by 2 mm, and the rear fender was restyled to clean up the area under the tail lights and provide more protection against flying debris.

In 2005, the frame was changed from silver to a matt black finish.

From 2007, both SV650 and SV650S models offered ABS and twin spark plugs for reduced emissions.

As of 2008, alongside the traditional SV650 and SV650S models, Suzuki offer a new SV650Sport (UK) or SV650SF (US) model with a more traditional complete fairing. The SV650S has been removed from the US market.

September 30, 2008, Suzuki Australia introduced the SV650SU, a detuned version of the SV650S, to augment their range of motorcycles that comply with the country's Learner Approved Motorcycle Scheme (LAMS).[1]