The Suzuki Swift is nameplate marketed by Suzuki carried by vehicles of three distinct derivations: 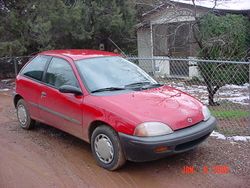 The Swift began as a marketing and manufacturing rebadge of the Suzuki Cultus, a supermini (or subcompact) manufactured and marketed worldwide across three generations and four body configurations — 3-door hatchback, 4-door sedan, 5-door hatchback and 2-door convertible — and using the Suzuki G engine family. The car was marketed in the JDM (Japanese domestic market) as the Cultus and elsewhere as the Suzuki Forsa, Chevrolet Sprint and Sprint Metro, Geo and Chevrolet Metro, Pontiac Firefly, Maruti 1000, Holden Barina, Subaru Justy, Suzuki Jazz, and Suzuki Swift. Versions of the Generation II Cultus were also produced until 2007 in India — and remain in production today in Pakistan.

The Generation IV Swift debuted at the Paris Auto Salon in September 2004 to compete in the European B segment with the Peugeot 206, Opel Corsa and the Fiat Punto. This generation of the Swift marked a significant departure with the previous Cultus-based models, with Suzuki re-designing the vehicle as less of a "low price alternative" subcompact and more of a "sporty" subcompact.[1] The Swift's design and driving characteristics focused on the European market with its chassis refined through a road-testing program across Europe.[2]

In Japan, only the 5-door body is available and four-wheel drive is an option for the 1.3 L or 1.5 L petrol engine. 1.2 L CVT transmission version also available in only front wheel drive version. The design of the new Swift was previewed on the Concept S and Concept S2 concept cars at auto shows, in the years leading up to its launch.

In Europe, the Swift was launched in 3- or 5-door hatchback form, with 1.3 and 1.5 L petrol engines, and a 1.3 L DDiS engine supplied by Fiat. The 1.3 L petrol is also available with an automated manual gearbox or with four-wheel drive.

The British Autocar magazine gave the new Swift a favourable 4/5 stars in road test, judging it a "thoroughly impressive all-rounder". The Generation IV Swift has received a four stars out of five rating in the EuroNCAP crash tests[3].

Since its global launch in 2005, which was kicked off with a marketing campaign fronted by the footballer Cristiano Ronaldo in many European countries, the Swift has recorded above forecast sales in most markets[citation needed]. In Japan, sales figures have been twice the forecast and in many European markets the model has been a runaway success[citation needed]. In Denmark, the GenIV Swift has been consistently in Top 3 for more than 2 years and was the car with the highest sales figures in 2006[citation needed]. In India, rapid sales of the new Swift model contributed to the 64% rise in Q1 profits for Maruti Suzuki. The Swift will be reintroduced to the U.S. market in 2010 to replace the Suzuki Reno.[4] 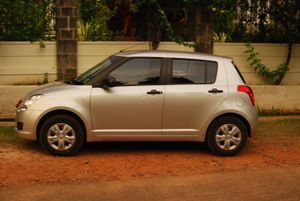 Suzuki introduced a sedan based version of the Swift called the Maruti Swift Dzire in the Indian market. The sedan has the exact same wheelbase as the hatchback version and has an increased overall length due to the addition of the boot.

In October 2005, Suzuki launched the Sport version of the new Swift in Japan and in September 2006 the model was introduced in most European markets. Named "Swift Sport", it is powered by a high-revving 1.6 litre, naturally-aspirated DOHC VVT 4-cylinder engine with a 11.1:1 compression ratio, 4-2-1 exhaust manifold, High lift cams, Forged pistons, and strengthened valve springs. 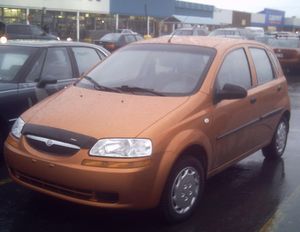 Canadian Suzuki Swift+, based on the Daewoo Kalos

For the Canadian market the Swift+ was created with a joint between GM Daewoo and Suzuki, After Suzuki stopped selling the Swift (Generation III) in 2001, to be superseded by a version of the Daewoo Kalos in fall 2003 (progenitor of the Chevrolet Aveo et al), named the Suzuki Swift+ (note the 'plus' symbol) and marketed solely as a 5-door hatchback.